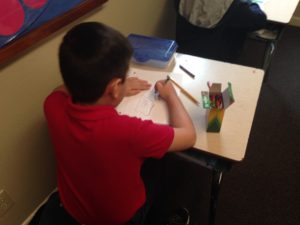 November 2015: I met Aleczander when he was halfway through first grade and his parents asked me to help them figure out what was going so badly wrong for him at the public school. Aleczander’s articulation skills were less than those of most two-year-olds, and he was having a difficult day asthma wise when I first met him, but he was sweet and totally compliant with all my requests. I couldn’t understand too many of his words, however, as long as his mother was present and he was able to use gestures and objects, I was able to understand the words he spoke during that assessment session. See a portion of the video assessment report that I created for Aleczander’s mom to take to the school to request services for his obvious speech and learning disabilities. partial November 2015 assessment report here.

Now, over a year later, I believe that my efforts to help only made things worse for Aleczander at his public school. It is true that Aleczander’s IEP team did increase his special education services during his first grade year, however his school continued to deny that he had ANY learning disabilities and to insist that he was able to do grade level look when he was sufficiently motivated to do so. It is very much an understatement when I say that the teachers weren’t overly nice to him, and the kids took their lead from the adults. Aleczander’s situation became increasingly grim as his articulation skills regressed. By May of 2016, Aleczander had developed fluency problems. In other words, he was stuttering; the secondary stuttering characteristics made him look as if he had developed Tourette’s syndrome. The school district continued to insist that “Aleczander has all the sounds he needs” and to state that the stuttering behaviors were simply Aleczander’s way of getting attention. Several weeks before first grade ended, at the same time the teachers were insisting that Aleczander had mastered his goals, made a year’s worth of progress, and was doing just great, a speech therapist friend agreed to provide Aleczander with a pro bono speech assessment.  See a portion of May 2016 language sample here.

Fast forward again . . . After a disastrous first grade year (2015-16), Aleczander attended summer school at San Antonio’s best school for learning disabled children–pro bono. Heads up, we have another good news bad news story coming here. . . Aleczander had become so terrified of educational settings that he spent the first week of summer school cowering under the Lego table and the last three weeks telling teachers that no matter what they tried to tell him, or teach him, he knew better . . . “I can’t read!” he wailed. In July, at the end of summer school, the lower school director told Mom, “we love Aleczander, but we can’t help him. He needs intensive speech therapy before he can benefit from academic therapy. And get him to pediatric neurologist ASAP. He looks to us like he might be having petit Mal seizures.”

At this point, three years after they had just moved into the school district with Aleczander already diagnosed as having developmental dyspraxia, Aleczander’s parents didn’t have many options. They were sure of one thing however, Aleczander wasn’t going back to the public school! The private school that they found couldn’t provide the speech therapy Aleczander needed, nor did they have trained dyslexia and dysgraphia teachers. However, the new school’s  teachers did know how to determine present levels of performance and base instructional strategies on current levels of functioning. Within a month, Aleczander had learned to trust teachers and his fellow students again. He started to smile– and he made friends. Gradually he got to the point where he could benefit from academic instruction in the presence of other children. He began to learn to read and write. Check out this video, done in May 2017. Aleczander is reading at beginning kindergarten level so he’s still got a long way to go, but he’s finally heading in the right direction. He smiles, he talks, and he doesn’t stutter!  See Aleczander reading a CVC word here.