Did You Know That Henry Winkler Has Dyslexia? 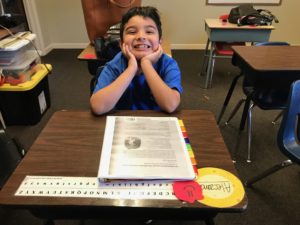 Just like The Fonz, Aleczander, age 8, has dyslexia. Aleczander also has dysgraphia and oral motor disfluency. The fact that Aleczander is a third grader at Salem Sayers Baptist Academy and no longer attends his public school can be summed up in a few words: These parents were no longer willing to allow their child to be abused by special educators. As Henry Winkler states in an interview with The Guardian, “Even though I was a famous actor, I still thought I was stupid because I’d been told that so many times at school. It was imprinted on me and that’s why I think it’s so important that parents, teachers, librarians, etc don’t even joke about a child being stupid. All children know when something is wrong and they can’t understand something – they never need someone to tell them they’re stupid.”

Public school was awful for Aleczander during kindergarten and downright abusive during first grade. In August 2016, Aleczander’s parents heard these words from a TEA Mediator: “Save your child, get him out of here, this special educational system is corrupt, but then, they mostly all are.” They took his words to heart, and voted with their feet–and their cash! The iMovie attached to this post shows just how well students with specific reading and writing disabilities when their schools, and their teachers, partner with parents to provide multi sensory learning programs directly correlated to an individual student’s specific strengths and weaknesses. Also included in this post is specific information about how public school officials out and out lied about Aleczander for two entire school years in order to provide special education services mandated by both federal and state law.

In May 2016, the school district’s Lead Licensed Specialist in School Psychology admitted that Aleczander possesses all of the characteristics of dyslexia and dysgraphia per the testing that had been done; she then fell on her sword for the public school that rewarded her with a new title and an office with a window and stated at multiple special education meetings: “Dyslexia isn’t a learning disability. Aleczander doesn’t meet special education criteria for any specific learning disability.”

Aleczander struggled valiantly and made significant progress at Scottish Rite but was dismissed from dyslexia classes in January 2018 because his inability to speak intelligibly (oral motor disfluency) makes it impossible for teachers and peers to understand him. “He needs 1-1 instruction,” the director of Scottish Rite Learning Center said, “until you get that speech fixed.” Problems with Aleczander’s ability to verbally express his wants and needs are also the reason that the Winston School has been unable to provide services for Aleczander during his second and third grade school years.

Aleczander’s extreme expressive language deficit can be laid directly at the door of the public school where for two years he was denied ANY of the special education services that he previously had been receiving in Odessa, Texas from birth to age four. See US Department of Education, Office of Special Education and Rehabilitative Services Memorandum: A response to Intervention Process Cannot Be Used to Delay-Deny Preschool Special Education Services under the Individuals with Disabilities Education Act (OSEP MEMO 16-07)

During Aleczander’s Kindergarten year, parents made weekly and sometimes daily trips up to school to plead for help for their son, only to be told that Aleczander needed to behave himself. Minimal first grade special education services were finally awarded to Aleczander and were punitive in the extreme, details provided in previous and subsequent posts. This year Aleczander’s classroom at Salem Sayers has a total of eight children, all of whom utilize the 3rd Grade Abekka Curriculum. Aleczander’s teacher is using Abekka kindergarten level reading and writing materials with Aleczander.  This video Saving Aleczander December 1, 2017 & January 29, 2018 shows Aleczander reading with his teacher at Salem Sayers. Aleczander isn’t caught up yet, but he’s on his way!