Kids with Dyslexia Aren’t Stupid, Pass it On . . . 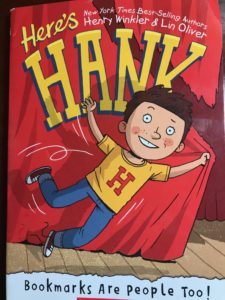 Henry Winkler, author of 17 Here’s Hank books, uses personal life experiences as his literary inspiration for Hank Zipzer, a bright, creative, little boy who knows that, while he can’t read and write like other kids do, he isn’t stupid. Like many children with average intelligence and specific learning disabilities, Henry was often in trouble when he was in school. He had some good teachers and some really bad ones. And, like many other resourceful kids struggling to learn to read and write and above all else, to look normal, Henry, and his alter ego, Hank, developed entertaining and at times outlandish coping strategies. I recently discovered Winkler’s Here’s Hank books, have purchased the first eleven in the series, and am planning to start reading Bookmarks Are People Too! (Scholastic Books, 2015) with Aleczander this week.

Some things I like about Here’s Hank: Bookmarks Are People Too! 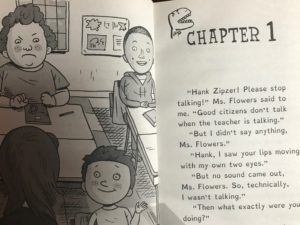 Henry Winkler, of television series Happy Days fame, became a famous actor when he was cast as Fonzie, a super cool biker and high school dropout. Comments taken from an interview that Henry did with The Guardian:

Question: Are the teachers in your Hank Zipzer books Miss Adolf and Mr Rock based on real people?

Henry’s Answer: Yes. Miss Adolf is based on my real teacher and she was a horrible teacher. Mr Rock (the character I play in the TV version of my Hank Zipzer books) is based on my real teacher and he was the man who said to me “Winkler (teachers called kids by their surnames in those days) when you get out of school you’re going to be okay”. Those words meant everything to me.

Question: Why did you decide to write the Hank Zipzer books?

Henry’s Answer: It was an accident. My agent suggested it to me and at first I was shocked, me write a book? I thought I couldn’t do it, I thought I was too stupid to write a book. Even though I was a famous actor, I still thought I was stupid because I’d been told that so many times at school. It was imprinted on me and that’s why I think it’s so important that parents, teachers, librarians don’t even joke about a child being stupid. All children know when something is wrong and they can’t understand something – they never need someone to tell them they’re stupid. They need help in solving the problem. I wrote the books mainly to make the reader laugh first and they just happen to be based on someone I know very well, me.

This entry was posted in Creative Non-Fiction, Learning Disabilities. Bookmark the permalink.