Shade Island opens at a wedding in Cypress Springs, the small Texas town in which my second novel (Exc 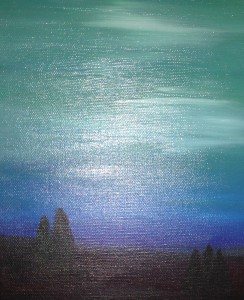 use Me for Asking) was set. Claire Louise Richards (of Daughters of Memory fame) discovers that Ralph Anderson, the man that the entire town of Molly’s Point believes that she ran off with back when she was a high school senior, is very much alive. For almost thirty years, Ralph has been living approximately one hundred miles from Molly’s Point with his wife and three sons. Claire Louise, who all along has believed that Ralph died in an accident the night before they were to run away together, totally loses it when she is confronted with the reality of her old beau as a living breathing person. The result? a total disaster!

Claire Louise has never done well when something that she wants is denied to her. She attacks Ralph and his wife, initiating an all-out brawl that completely shuts down the wedding reception and gains her some national news exposure on YouTube videos posted by wedding guests who filmed the incident on their cell phone cameras. Not for the first time, she is threatened with perhaps criminal and certainly civil charges, but she has her counter attack all planned out. She is going to file charges against Ralph and his wife for deceiving her and kidnapping her son.

Macy Rose Porter, Claire Louise’s sister, is one of the two protagonists in Daughter of Memory. Macy’s husband, Carlton, and the Porter’s best friends, Sheriff Curtis Oates, Jr. and his wife, Nina Oates, work together to extricate Claire Louise from yet another disastrous mess that appears to have come about solely as a result of her own actions. They quickly learn that nothing is as it at first seems. “We can all agree that Claire Louise is no saint, but from what I can tell, this time, she’s been more sinned against than a sinner,” says Curtis. To which Carlton adds, “just as long as none of us go off half-cocked here. Claire Louise’s grandiosity is, after all, only par for the course when it comes to my wife’s sister.”

And Claire Louise isn’t the only sister in trouble in Shade Island. Macy Rose, an educational diagnostician, works for the public schools where the early childhood assessments and sociological profiles that are part and parcel of her job are becoming more and more problematic as far as the school district higher ups are concerned. Macy no longer expects to save the world, or to right all of the wrongs that she encounters, but she does feel compelled to do as much as possible for each child on her case load. It’s summertime, and technically she’s off work, but her efforts to finish up assessments left pending from the previous school year bring her into conflict with the authorities at the school district. She’s been out at McKenzie Park, looking for the little boy she needs to finish testing, however McKenzie Park is under investigation for drug manufacturing and human trafficking and state and federal authorities are not sure why Macy Porter keeps going out there.

Carlton Porter started Molly’s Point Counseling and Learning Center when he and Macy moved into the house that she inherited from her grandmother ten years ago. He is the only one of Shade Island’s major characters who didn’t grow up in Molly’s Point. Carlton is not your stereotypical psychologist, i.e., he’s not airy fairy and he’s no flake. He is solid and steady, level-headed, and completely devoted to his wife of twenty plus years and to their two boys, now college students at Texas A&M in College Station. As he attempts to help Curtis and Macy figure out what evil forces are at work on various fronts, he is also trying to keep his business afloat, insure that Macy and Nina stay out of trouble, and keep his kids remain as distant as possible from the growing unease that seems to characterize relationships between locals.

Curtis Oates Jr. has been sheriff of Molly’s Point since his father retired from the elected position. He’s married to Nina Bertran, a social worker who works part time in Carlton’s office, part time in the Sheriff’s office, and who has been close friends with Macy since childhood. Curtis plans to run for state office next year and is confronted with growing evidence of drug operations and related criminal activity in his county as he works with Macy and Carlton to keep Claire Louise out of jail. When the Texas Rangers are called in to investigate a murder in town, and the DEA agents arrive to investigate the suspected infiltration of McKenzie Park by Mexican drug cartel operatives, Curtis finds himself smack dab in the middle of a conspiracy that threatens to derail his career at the same time it lands his long time friends in a world of grief.Curtis Oates

The atmosphere evoked by Johnny Cash’s rendition of Ghost Riders in the Sky exemplifies many of the themes of  Shade Island. When Shade Island opens, Claire Louise is older (she was not yet thirty at the conclusion of Daughters of Memory); now she’s coming up on her thirty-year high school reunion. However Claire Louise is still a little girl, stomping her foot, demanding that she get what she wants when she wants it, dreaming impossibly big dreams and, as always, completely unrealistic as to how she attempts to achieve her goals. Claire Louise has been married four times, has two grown daughters, runs the family ranch, and rides Showstopper Three when she serves as the grand marshal of Molly’s Point’s Fourth of July parade every year. Her husband Leonard Pittman is an fishing boat captain and is not a nice man. He may even be a very bad man, the worst of all of her husbands. She’s being manipulated and conspired against by him, but has become so distracted by yet another lawsuit of her own instigation that she fails to notice. Despite Macy and Nina’s best efforts to alert her to the danger, Claire Louise continues to pay attention to all of the wrong things, and readers watch as her life falls apart all around her.

In contrast to Claire Louise, Macy Porter knows exactly who she is. She has a clear vision of where she’s going and the things that she wants to do along the way. She’s learned some hard life lessons; in Daughters of Memory, she had a nervous breakdown when she became so obsessed with besting Claire Louise; she almost lost her husband and kids that go round. Today Macy is clear-eyed and articulate. She gets into trouble because she sees things in black and white and she doesn’t compromise easily. Still, despite the many ways in which Claire Louise infuriates her, bottom line, Macy Rose will always remain loyal to her sister.

Since her grandmother’s passing, Macy has been in regular communication with the ghost of the woman people in Molly’s Point knew as Mrs. Louisa. Macy is increasingly aware of the thin line that exists between the concrete here and now world that she lives in and the one that exists all around us. “There’s good and bad out there, the same as here,” she says. She doesn’t talk about the spiritual forces that operate on earth to most people, because, “people were all too ready to write me off as crazy once before, this time I’m smart enough not to give them any ammunition.” But she is aware of the spiritual world,  . . .Claire Louise, she’s become that ghost rider in the sky . . . their faces gaunt, their eyes were blurred, Their shirts all soaked with sweat . . .