The Visual Storyboard: A Novel Idea! 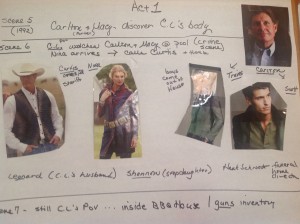 Since learning about storyboards from script writers, I have been using this nifty visual format to keep my work alive during the down times when I’m so busy with my day job that my novel’s characters get totally neglected. This photo shows one of the many chart tablet pages that line the walls of my study. Shade Island is divided into 3 acts and contains approximately 175 scenes. The charted scenes are all listed sequentially with each scene being represented by pictures, a short summary, details that need to be added, notes about revisions, and/or all of the above.

I created this storyboard from the ‘final’ draft that resulted after I’d rewritten Shade Island during the fall and winter of 2011. Last winter, I’d sent the completed and ‘totally ready to go’ manuscript to my agent and started on Macy and Nina’s next adventure, thinking (way too optimistically) that I’d finish my second mystery over the summer break. McKenzie Trailer Park involves drug trafficking, money laundering, Mexican drug cartels, and a little boy named Vicente who goes missing. As I researched McKenzie Trailer Park I realized that I was never going to finish that book over my six weeks summer vacation (by August, I had four chapters written and random notes about where I was going, but no real story line). Reluctantly, I faced the fact that many of those rich drug running, money laundering, and human trafficking details  (why was I just now realizing that these nefarious events had been going on in Molly’s Point for years?) needed to be included in Shade Island.

I’m sure that you can imagine how I fought the growing surety that I was going to revise Shade Island yet another time. Mystery novels where all of the plot points and setting and character details have to ‘fit’ and ‘foreshadow’ but not ‘spoil’ the story are tough to write! I’ve learned that I need to ‘plot out’ my entire story, from beginning to end, and then write my way through it multiple times to make all the pieces work. Shade Island will be a much better book and so will McKenzie Trailer Park, I mused as I cannibalized the McKenzie Trailer Park storyboard chart tablet pages (still in their infancy) and cut and pasted much of that information into the new (bigger, better, tremendously richer in detail, but not yet finished) Shade Island storyboard.

This entry was posted in Writing Fiction. Bookmark the permalink.