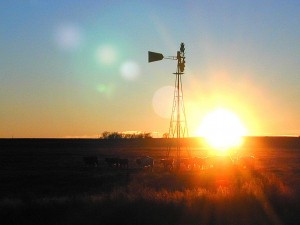 Macy Rose is looking out the back porch window, watching the sun drop below the horizon, and thinking about her father, Stewart Richards, who is dead, and her Uncle Ray, also dead. It’s mid July and the boys have left for College Station where they will attend freshman orientation, known at Texas A&M as fish camp. Macy is wondering if this miserable low sinking feeling resembles the way that her parents, or her grandparents for that matter, felt when she left the ranch, driving  her Falcon Sprint, heading for summer school out in Lubbock, only two weeks after attending her last high school graduation ceremony. She’s wondering if her father is upset that she and Carlton bought the boys a Toyota 4-Runner instead of a Ford F-150. She misses her kids, although they are only going to be gone for one week this time. But it’s the beginning of the end, and she knows it. Patricia, Uncle Ray’s daughter, just left and now Macy is unsure if the gnawing sick feeling in her stomach is because she never  wanted to be an empty nester, or if it is related to the fact that, many years ago when they were both Marines, her father saved Uncle Ray’s life. Why had no one ever told her about this before, she wonders?

The two men’s story is this: Stewart, Macy’s dad, and his brother, Macy’s Uncle Ray, were in the First Marine Division back in 1950. Along with 10,000 other Marines, elements of two Army regimental combat teams, a detachment of British Royal Marine commandos and some South Korean policemen, Stewart and Ray were in Korea to defend the relatively unarmed democratic South Korea against aggression from Communist North Korea, which had been heavily armed by Mao’s China and Stalin’s Soviet Union. This was after World War II, and the alliance between the United States with its democratic core principles and the Soviet Union with its Communistic ideology had vanished as if it had never existed at all.

By November 26th, the Allied Forces were completely surrounded by over ten divisions of Chinese troops in the rugged mountains near the Chosin Reservoir. The daytime temperatures averaged five degrees below zero and the situation looked bleak. Back in Texas, news was limited, and all of it was bad. Prayer groups were organized at churches, but most felt that the situation was hopeless, and were braced for news of an American slaughter and defeat. The word that Chairman Mao himself had ordered the Marines annihilated had filtered out even to Molly’s Point, and there was concern that retreat was impossible and that our soldiers were doomed.

Deciding that if they defended, they would be wiped out, the marines formed a 12-mile long column that consisted of 15,000 soldiers and attacked the enemy. There were 78 miles of narrow, crumbling, steeply-angled road and over 100,000 Chinese soldiers between the Marines and the sea at Hungnam. Both sides fought savagely for every inch of that territory and the march out became one monstrous, moving battle. 3,000 of America’s soldiers were killed in action, 6,000 were wounded, and thousands suffered severe frostbite.

At some point during that two weeks of unspeakable misery, Uncle Ray was wounded, and rendered unable to walk. Stewart, the younger brother, five inches shorter and weighing at least 30 pounds less that Ray, carried his brother all the way to the sea, and to safety, on  his back.

Uncle Ray recovered from his wounds, as did Stewart, although severe frostbite caused Stewart to loose some of the toes on each foot. Both men returned to Molly’s Point to the family ranch and business, their parents, wives and children, lived into their seventies, and, later in life, attended annual reunions with their surviving Chosin Reservoir fellow marines. Neither of them ever talked about their experiences in Korea to family members. Neither ever cared for or trusted the communists, or would buy a product made in any of the Soviet Union block countries, China or Japan. Both railed against liberals such as Bill and Hilary Clinton, who traveled to Russia to discover what was wrong with the United States, Jane Fonda, who ridiculed American Soldiers as she sucked up to the forces of evil, and John Kerry, who came home and demeaned and denigrated both his country and his fellow citizens and the democratic principals that make American the country that they had fought for.

Of course Macy had known that her father had been in Korea, but she only learned specifics regarding their experiences when her cousin Patricia, Uncle Ray’s daughter, repeated the story that her father had told her before he died. “Daddy said your father saved his life.”

“I wish I’d known this when Daddy was alive,” Macy said. “And I wish I hadn’t learned it on the day that my kids left home for college.”

“Well, you did know that they’d been Marines and that they were in WWII and later in Korea. We all knew that, sort of. And then, when our parents started going to those Chosin Reunions, what did you think that was all about?”

Macy laughed. “I thought they were old and wanted to travel because they were so bored out here in Molly’s Point, if you want to know the truth. Just like you travel at least half of the year yourself. But now I’m wondering why Daddy and Uncle Ray went all those years barely speaking to each other.”

Patricia had just told Macy that, since she didn’t have kids or expect to have any, she was going to leave her half of the original Richards Ranch to Claire Louise and Macy’s kids. “But you tell your boys that they’re going to have to take care of me when I’m old and infirm,” she said. She laughed when she said those words, but Macy read the fear in her eyes.

Macy reached out and patted Patricia’s hands. She tried and couldn’t think of any words to say. Eventually she half-laughed and said, “Maybe we’re all going to have to stay healthy right up to the end, because I can’t see any of the four of them making us chicken noodle soup and running to town for us when we can no longer drive and are out of Depends.” Then, deciding the only course of action possible was to change the subject, she repeated her question, “Why did our fathers both get morose and moody and quit hanging out together?”

Patricia looked out the front windows, to where the sun was obscured by dark clouds that seemed to have sprung up from nowhere, and said, “I didn’t know that it was supposed to rain today.” And then, before Macy could repeat the question, she said, “I don’t know, of course, but I think it was the women. Daddy said they got crosswise with each other at the drop of the hat and it was easier all around to quit the family get-togethers.”

Was that true? Macy wondered. She thought it unlikely that the tension that had always existed between Grandma and her two daughters-in-law could have accounted for the gradual cessation of Richards Family gatherings. At least it didn’t seem to Macy as if Ray and Stewart should have survived a death march and returned to a situation where Thanksgiving family dinners were so filled with tension that it became easier not to have them. “I wonder how many of the family truths that we think we know are eventually going to turn out to be either misrepresentations, half-truths, or complete and utter fabrications,” she said.

This time it was Patricia who reached out and patted Macy’s clenched hands. Patricia’s laugh was fragile and sounded as if she was forcing the sound out through a constricted larynx. “Life’s hard, and then you die,” she said. Then, gasping at the audacity of her own words, she snatched up her thousand dollar Louie Vuitton handbag, and said, “I’ve got to go. I just came by to cheer you up because I ran into Carlton at City Drug Store and he said you were down in the dumps because your kids left for college today. Looks like I did a great job of that, didn’t I?”

Macy brushed the tears off her cheeks, and stood and walked across the living room, to where Patricia now stood, her hand on the front doorknob. “Thanks for coming,” she said. “You maybe didn’t cheer me up, but you did give me something else to think about.”